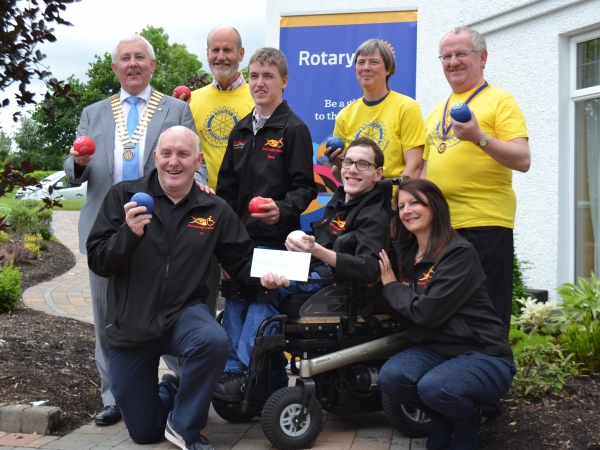 However through local lobbying, support from the Rotary Club of Enniskillen, who opened a disabilities charity fund and the Press who took up the story, they have managed to keep the Fermanagh Lakers Paralympic Club going.

The club includes a very successful Boccia team. One member of the team is William Graham who can be seen in the photogrph. William began life weighing just 1 lb 13 ozs and was three months premature. Within the first few days his parents found out that he had Ceribal Palsy which restricted all four of his limbs leaving him to grow up as a quadriplegic.

As he grew older he became involved with various sports. It was whilst attending Special Olympics Football and Athletic training that Roisin Henry, in the photograph, instantly noticed his potential when he tried to play Boccia.

By raising funds to keep the club going the Rotary Club of Enniskillen have enabled William and the the club he is part of continue to thrive and acheive even greater success.

As Joe Graham one of the club leaders who is with Graham in the photogrph above said "William has found sport a fantastic way of meeting new people and he has made friends throughout Ireland and the the United Kingdom. Sport has given him great opportunities which he in turn has used to inspire other young people. Sport meets his needs and helps him to be sociable and enjoy his life to the full". Both William and all the other members of the club would have lost all this if Rotary hadn't stepped in to save the day.