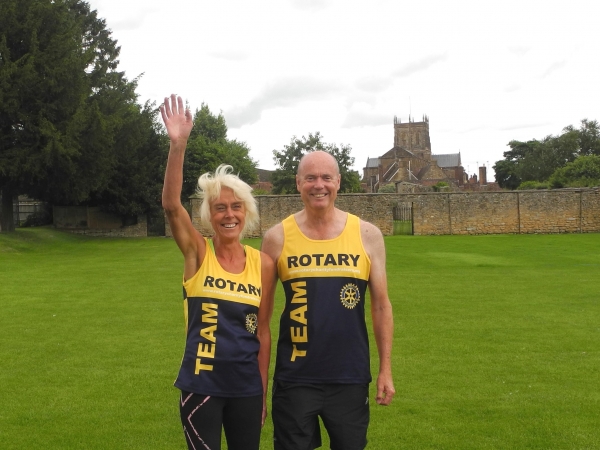 The TEAM Rotary running vests are manufactured in 100% moisture wicking material. The female vests have been especially made without a racer back following consultation with the ladies of Yeovil Town Road Running Club who have worked in partnership with the Rotary Club of Sherborne Castles for over 10 years putting on the annual Rotary Great Western 10K Run.

Stewart is the President Elect of District 1200 and will be leading a team of 100 runners at the Vitality Bath Half Marathon in March 2017. The whole team will be raising funds for The Rotary Foundation in its Centenary Year. The 100 runners representing one for each year of its existence. With him in the photograph is Rachel Goodfellow a member of the Rotary Club of Sherborne Castles.

Rachel set up her own charity in 2015 Hidden Needs Trust and supports it with various events and individual challenges. In 2015 she ran 7 marathons in 7 days. This year 2016 she has just completed 26 marathons in 26 days. Last year she raised nearly £10,000 and hopes to do as well if not better this year.